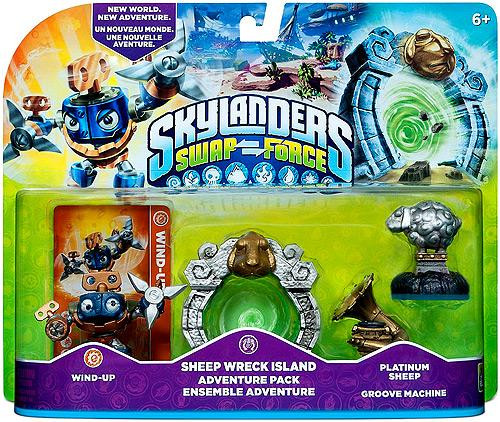 Sheep Wreck Island is the second and last Adventure Pack in Skylanders Swap Force. The Tech Skylander, Wind-Up, comes with this adventure pack along with two magic items, Platinum Sheep and Groove Machine.

The Sheep Mage rallies the sheep to spread their 'sheepdom' all over Skylands as payback for being pushed around and mistreated. Blindbeard and Flynn help you on your journey to stop the Sheep Mage.

Flynn goes through the portal to Sheep Wreck Island, and stumbles upon the Sheep Mage's plan to exact revenge upon the people of Skylands. He is soon discovered, and the Sheep Mage turns Flynn into a sheep. The Skylanders embark on a mission to stop the Sheep Mage, all the while dodging and besting his minions scattered throughout the island. They soon encounter the Sheep Mage, who wields a magic staff that makes him unstoppable. Despite shapeshifting into his large sheep form and his minions standing in their way, the Skylanders destroy the Sheep Mage's magic staff, driving the villain away. Flynn is turned back into a Mabu citizen and both he and Blindbeard return to Woodburrow.